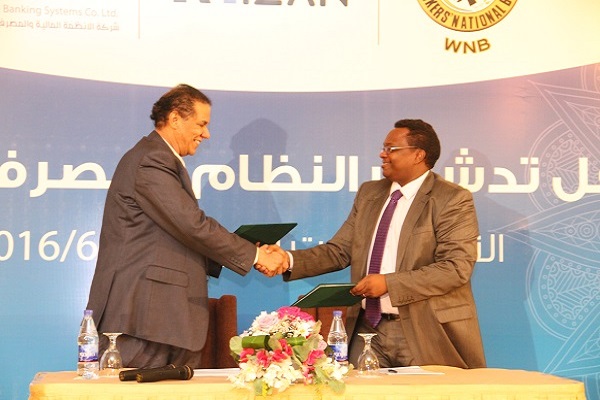 On Saturday, 4/6/2016, the General Manager of the Financial and Banking Systems Company Mr. Yassir Kamal Sati in the Nile Hall at Rotana Salam Hotel, the launch of the centralized Core Banking system “Mizan” in parallel with the signing of the contract of work of the system in the Worker National Bank  in May 2016. The opening ceremony was opened with a welcome speech to guests and attendance by Mr. Khalid Issa, In which he pointed to the importance of the ceremony and the company went in announcing the system coincided with the signing of the contract, and offers thanks to all the audience to receive the invitation and participation in the ceremony.
Vice Chairman of the Board of Directors, Mr. Fathur Rahman Jawish, spoke about the company’s history, the stages of its establishment and the various strategies it has followed in recent years to increase the company’s production, taking into account all the obstacles it faced from the US economic embargo on Sudan and the internal changes in the software market and the financial and banking sectors. .
The general manager of the company reviewed the system, its objectives, its importance and the plan to add a number of additional services to increase the efficiency of the system. He pointed to the company’s mission in developing innovative, effective and affordable financial and banking solutions and solutions, and creating strategic partnerships with its clients. Their technical investments to tangible benefits for them and their clients. He pointed out the current position of the company in the Sudanese and African markets, whereby the company market share valued by 20% of the banking sector (7 out of 35 Sudanese banks) and 3 customers in East Africa, which will be the start of expansion in East and West Africa. At the end of his speech, the Director General thanked the Supervisory Committee, the Executive Committee and the Software Section who oversaw the development of the system. The Board members and the former Director of the company also thanked Mr. Tariq Ahmad Khalid, who was the captain of this ship and led it to safety and supervised it until it became a reality. Tangible. .
Acting Director General of the Bank of Acting Workers, Mr. Mohammed Iqbal Babeker, received a lot of active participation in the ceremony. He praised the serious action taken by the National Workers Bank in his speech and the selection of Systems Company as the first provider of the comprehensive centralized core banking system “Mizan”. He congratulated the Bank’s employees and the company for this step because of the technical and financial benefits of the bank to ensure the efficiency of financial transactions and increase the productivity of the bank by maintaining the efforts of its employees and increase the speed of work.
The presentation was followed by a luncheon attended by representatives of banks and employees of the company to consult and discuss the next steps that partners should take together to ensure progress and success. In a detailed presentation of the company’s products, And the most important advantages built on it from its comprehensiveness and development to suit the rules of Islamic law and the controls of the Bank of Sudan, with the ability to adapt to the needs of different banks and the needs of the bank in particular. He also pointed to the high value of the support, support and training efforts provided by the support team of the highly qualified and experienced company in the banking system over the accumulated experience in the banks. He also mentioned the list of clients of the company inside and outside the Sudan. He pointed to the marketing strategy of the regional trend in Africa and the neighboring markets, noting the importance of attention to the software market in Sudan because of its large financial revenues and increasing its focus as new business opportunities globally.
The ceremony concluded with a dinner to attend the tunes of authentic songs by presenting the artist Nasr El Din El Sherif, and his selection for Sudanese national costumes reflecting the company’s orientations. The media was also hosted by the Blue Nile channel to document the concert.